For the past 12 months, the city of Cape Town experience its worst drought in recorded history. This reached the point whereby the city had to declare that a “Day Zero” (the day where the water demand of the city outstrips its ability to supply) was fast approaching and that the city needed to change its attitude towards its water consumption to ensure that the Day Zero is pushed back as far as possible. The crisis was so severe that it featured on international news networks such as CNN and Sky News. In response to this announcement the nation rose to support the city. Water collection drives were conducted across South Africa, in an effort to push back the day zero and even possibly avoid it all together.

BAPS Charities South Africa conducted it’s own water drive at all its major centres during the month of February. Namely; Mayfair, Lenasia, Laudium, Benoni and Durban. Thanks to the great effort of our supporters at these centres we managed to collect a total of 4900 Litres of water. The collection was delivered to local relief centres in Cape Town.

Due to the nation’s response to the crisis, day zero has now been pushed back to 2019. This has been a true display of the unity and spirit of South Africans. 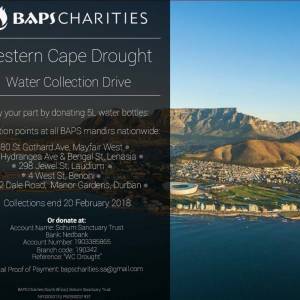